Triumph of T. Smirnovas in the Baltic Grappling Championship 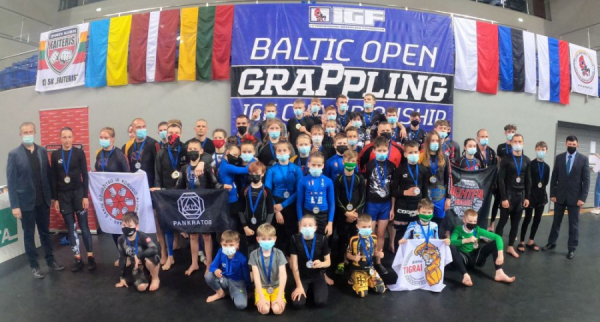 Tomas Smirnovas, a fighter from the capital’s martial arts centre “Smauglys”, triumphed at the Baltic Grappling Open Championship. One of the best grappling wrestlers in the country defeated teammate Kasparas Strazdas in the final and donned a champion belt in the discipline of NoGi.

“In the absolute weight category, fighting is never easy. Plus, they always remind you not to stop. If you want to be the best, you must always move forward. I am currently working on the actions of my legs – clinching, spins to successfully prepare for the tournament in Poland in September and the IGF World Championship” – said the absolute champion Tomas Smirnovas after the Championship.

In the discipline of NoGi, Miglė Podviskytė from Vilnius was unsurpassed among girls in the absolute weight category.

In the discipline of Gi, the absolute winner was Romualdas Girdiušas representing Rogers Gracie Academy Vilnius. In addition, Latvian athlete Alina Dubosa defeated all the girls.

T. Smirnovas secured his win in his weight category up to 80 kg in the NoGi discipline. In other weight categories, Konstantinas Mokšinas (up to 64 kg), Markas Bavėjanas (up to 72 kg), Artiomas Ponomariovas (up to 90 kg) from Klaipėda and Edvardas Petrovičius (over 90 kg) from Vilnius triumphed in the men’s group.

Among the girls, Samanta Drilingaitė (up to 53 kg) from Kaunas, Lijana Lipinskaitė (up to 61 kg) from Jurbarkas, Inna Matvejeva (up to 69 kg) from Riga, Lolita Oboleviča (over 67 kg) from Riga became the champions of their respective weight category.

In the Gi discipline, Viltė Merkevičiūtė (up to 53 kg) from Šakiai, Deimantė Aukštuolytė (up to 61 kg) from Ukmergė, Inna Matvejeva (up to 69 kg) from Riga, Miglė Podvaiskytė (over 69 kg) from Vilnius became champions in their respective weight categories.

A total of 220 athletes competed in Jonava.

“I can't speak for everyone, but for many, the tournament itself left the best impressions. It must be understood that we live in times of a pandemic, so every meeting, every fight, makes even greater sense than in previous years.

Another thing – this tournament was a great introduction to the IGF World Championship. We are all preparing for it and we all hope to be in the best physical form during it,” said K. Smirnovas.

The 2021 World Grappling Championship will be held this autumn in Panevėžys.