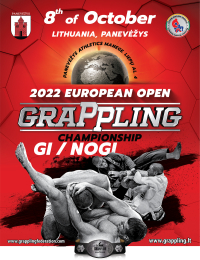 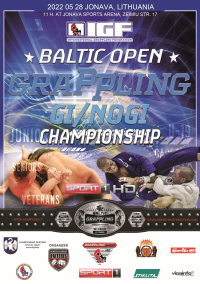 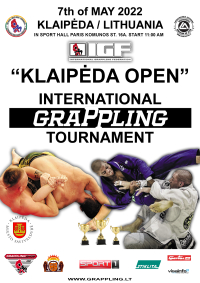 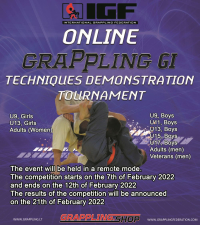 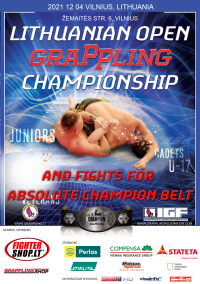 At the second IGF World Grappling Championship held in PanevÄ—Å¾ys CIDO Arena over the weekend, Lithuanian fighters left no hope for their competitors from foreign countries. In the discipline without a kimono, they won as many as five champion titles in six weight categories in the main men’s group.

“The goals have been met beyond our expectations. I think we have proven once again that Lithuanian grappling is moving in the right direction. The most important thing is to keep on doing it” says Adrijus Kupstas, President of the Lithuanian Grappling Federation. 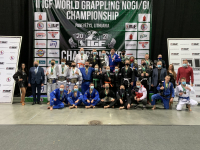 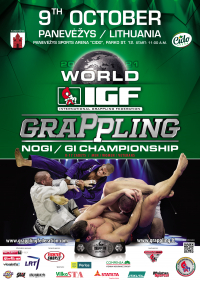 K. MokÅ¡inas is a candidate for the title of world grappling champion

On the 9th of October of this year, the second IGF World Grappling Championship will be held in PanevÄ—Å¾ys CIDO Arena, the favourites of which are considered to be Lithuanian fighters. One of them is the legendary Konstantinas Mokšinas, who, among all other titles in various martial arts, also owns the title of the 2018 world grappling champion.

“I have no special goals – I just want to defend the title of champion. If the highest powers help me – there will be victories. Of course, during times of this pandemic, it is very difficult to predict something like this until I know what rivals will arrive or how prepared I will be physically.

Of course, the preparations for the upcoming championship are intense. I have two training sessions per day, the physical load is a lot, but I couldn’t say that the situation is very different from the previous time. We fighters are constantly in competition, so we must always be ready. Of course, the world championship is at another level, but if I had not been ready a month or two ago, I would not have been ready for the championship,” said K. Mokšinas.

Last weekend, the fighter took part in a tournament with other Lithuanian national team leaders in Poland, where he took second place in the group of masters. K. Mokšinas himself was not surprised by such a result.

“In Poland, the main struggle was in the adult group. Our leaders kept themselves busy there as well. And in the veteran group, things are much simpler. Anyway, I think both me and our other guys have experienced great lessons before the World Grappling Championship.

In Poland, the rules were a little different from our grappling, because there the fight is usually built on leg locks, twisting and so on. In PanevÄ—Å¾ys, some things will not be possible, but this is not a problem –we have long been accustomed to different rules. I mean, if it didn’t work out, we really couldn’t blame the system (smiles). On the other hand, none of us think about a possible failure,” said one of the participants in the lower weight categories.

K. Mokšinas plans to compete in the world championship in two disciplines – with a kimono and without a kimono. Many victories in the athlete’s CV are won in both disciplines.

“It makes no difference to me how to fight. In general, I don’t even know which way is more convenient for me. Sometimes it's better without a kimono, sometimes with a kimono. Again, it is difficult to predict who I will have to fight in the championship, but whatever happens, I will go and fight,” K. Mokšinas summed up his thoughts.

KÄ™stutis Smirnovas, the founder of the International Grappling Federation, also planned to compete in the group of masters. The legendary fighter, who reached great form, was one of the favourites to win the title in the heavy weight category. It is already clear that the name of the planet champion will go to someone else – K. Smirnovas suffered an injury and will not recover until the championship.

“Of course, it’s disappointing, but that’s the life of an athlete. It doesn’t even help that my current form was the kind I haven’t had since returning to the big sport. Since things happened the way they did, I will have to watch the championship as a spectator,” said K. Smirnovas.

While presenting the World Championship, the President of the Lithuanian Grappling Federation Adrijus Kupstas mentioned that he hoped that at least half of the belts would stay home in Lithuania. Is one of them for the group of masters? We'll find out soon. 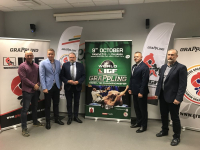 The World Grappling Championship in PanevÄ—Å¾ys was presented

On October 9, the second IGF World Grappling Championship will be held at the Cido Arena in PanevÄ—Å¾ys, where 150 professionals from this sport will fight for the belts created especially for this celebration. The latter had to find out the best ones last year, but due to the COVID-19 pandemic the tournament was postponed to this year.

„The date of the World Championship has changed twice, but we are of the opinion that the more time we have, the better we can prepare for the tournament. We all know why the championship did not take place last year, and this year the date has shifted by two weeks due to the huge number of international events.

Triumph of T. Smirnovas in the Baltic Grappling Championship