The World Grappling Championship in Panevėžys was presented 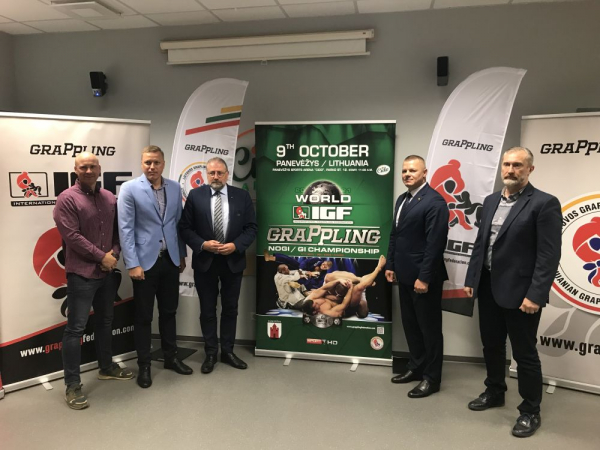 On October 9, the second IGF World Grappling Championship will be held at the Cido Arena in Panevėžys, where 150 professionals from this sport will fight for the belts created especially for this celebration. The latter had to find out the best ones last year, but due to the COVID-19 pandemic the tournament was postponed to this year.

„The date of the World Championship has changed twice, but we are of the opinion that the more time we have, the better we can prepare for the tournament. We all know why the championship did not take place last year, and this year the date has shifted by two weeks due to the huge number of international events.

In general, the preparation for this championship is different. Just like in fights, doing the same action, you will not do it the same twice, so there was one situation in the organization - in Vilnius, in Panevėžys - another. Here we got all kinds of help and all our needs were met, so I have no doubt that this is not the last big grappling tournament in Lithuania.“, - said the Founder of the International Grappling Federation Kęstutis Smirnovas.

Representatives of twenty countries are planning to come to the tournament. In addition to grappling wrestlers from neighboring countries, Panevėžys audiences should also see athletes from exotic countries Dominican Republic and Ghana.

There is almost no doubt that, as in the first IGF World Grappling Championship, the favorite label will belong to Lithuanians.

„We certainly hope for many victories. We have to believe that, because the Lithuanian grappling has raised the plank high enough. I personally hope that at least half of the belts will remain in our country. Lots of hope in Tomas Smirnovas, Danielius Grėbliūnas, Kasparas Strazdas. We also have very prominent fighters both among the youth and among the masters. I don't want to mention many surnames so that I don't forget something, but the whole team consists of the highest level athletes.”, - said President of the Lithuanian Grappling Federation Adrijus Kupstas.

Panevėžys first encountered grappling two years ago, when the open Panevėžys Championship took place in the capital of Aukštaitija. Immediately after this event, details were laid for the upcoming World Championship.

„Our strategy is to become not only a city of athletes, but also a city of sporting events. Recently, we can rejoice and be proud to be able to attract solid sports competitions. Of course, the fact that we have a great sports base and considerable experience contributes to this. This gives hope that the World Grappling Championship will be held at the highest level“, - claimed Panevėžys city mayor Rytis Račkauskas.

„When cooperation with federations takes place, then initiatives also emerge. That Panevėžys city championship you mentioned was the beginning that is why the organizers of the World Championship chose our city. For me personally, the memories from that first event are nice, so I wanted to move everything to a higher category“, - Justinas Jasiukaitis, Head of the Sports Department of Panevėžys City Municipality, who contributes the most to the organization of the championship, spoke.

The championship will be held in Gi (with kimono) and No gi (without kimono) disciplines. In total, the winners and prize-winners will emerge in forty-four different categories.