Through the pain to the stars. More and more stars of fighting sports choose grapling. 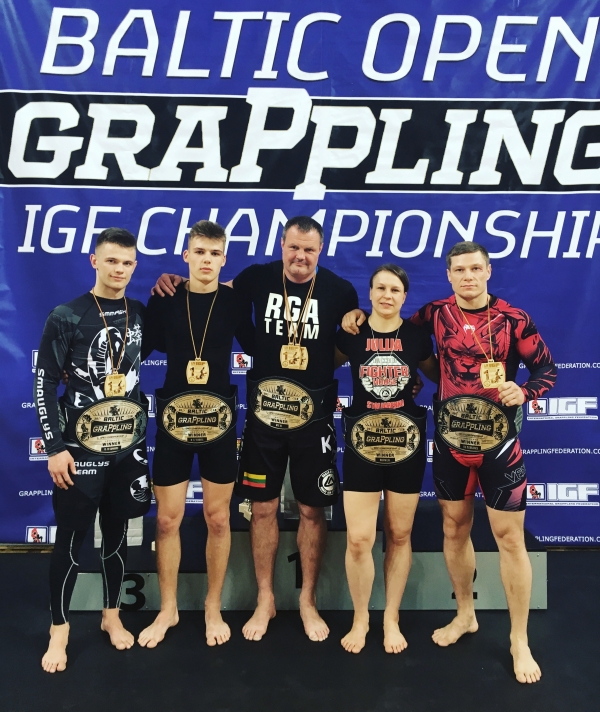 Lithuanian Grappling Federation  was founded only four years ago. Now, however, it already has something to boast about. More and more participants are taking part in the organization's events, including well-known names in the world of martial arts. For example, the athletes who compete in bushid tournaments in the capital's arena "Siemens" competed in the last Baltic Championship: Mindaugas Veržbickas, Konstantinas Mokšinas, Matas Stebuliauskas, Julia Stoliarenko. Often, Teodorius Aukštuolis is also among these athletes.

"The arrival of each star in the tournament encourages to come more athletes and spectators. In other words, good athletes greatly facilitate the work of manager, as they become a kind of advertising for the tournament. Many of the aforementioned athletes are already very successful and have the opportunity to choose major tournaments. But they come, participate, help us a bit, which is very delightful", said Adrijus Kupstas, President of the Lithuanian Grappling Federation.

What do you think who has the greatest impact on these athletes that they are choosing grapling tournaments?

There is no one thing. All this involves contacts, relationships, coaches, work, etc. Everything consists in one and then gets a good result. When organizing tournaments, we want that the spectator would be happy and that for the athlete the participation would be a pleasure. And the athlete, in turn, will always choose a more orderly tournament than the one that is constantly disorganized.

Could you distinguish the most deserving fighter who chooses grapling tournaments?

One is hard to distinguish. Both M. Veržbickas and T. Aukštuolis are top class fighters and, naturally, they adorn our events. CV of Konstantinas Mokšinas, on the other hand, is impressive, he is a big star, but we are used to it and we already appreciate his participation as a completely understandable subject.

How does the involvement of these athletes affect young people?

Very large. Young fighters are trying to be like these stars and they even reach the level of these stars without even knowing it. Which soldier does not want to be a General? So did Tomas Smirnovas, Danielius Grėbliūnas, Deividas Matusevičius.

Often, we also receive inquiries from foreigners, which fighters will participate in the tournament. The goal is to test yourself in the fight against better athletes.

On the 26th, 27th, 28th of this year, the World Grappling IGF Championship will be held in the capital of Lithuania - in Vilnius, Arena of Lietuvos Rytas.