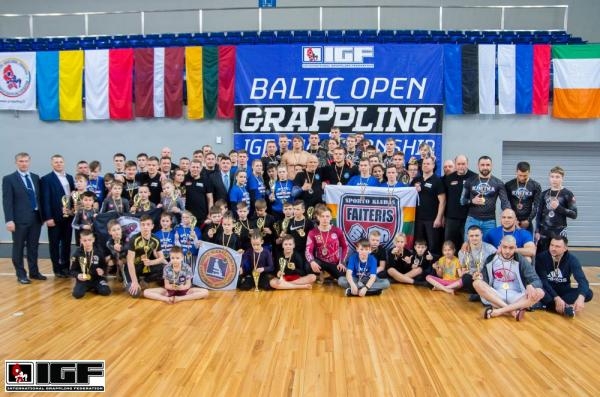 Kasparas Strazdas, an eighteen year-old member of Vilnius “Smauglys” club, triumphed in the grappling championship of the Baltic States. In the finals of the Absolute NoGi group (without the kimono), he defeated Mindaugas Veržbickas, a representative of Ukmergė Judo Club. In addition, on his way to the finals, he managed to beat the biggest star of the tournament Teodoras Aukstuolis, who has won a number of MMA tournaments in Japan. Theodoras Aukstuolis himself though, doesn’t consider this defeat as very significant.

"Of course, I tried to win, but I am not very upset, because my main goal was to test my strength," –  said T. Aukstuolis after the contest.

In the female group, in the Absolute category, Julija Stoliarenko from Kaunas, one of the brightest Lithuanian stars of the marshal arts, became the winner. She has beaten the rest of the contestants by employing hurtful actions against her competitors. At the finals she also snatched the victory from the world champion Aida Vasiliauskaitė. However, in the Gi discipline (with the kimono) she proved to be better than any of her opponents.

“I was hoping to win everything, so I'm disappointed. The championship has reminded me that I have to improve, and the experience gained there will obviously help me achieve that,” said A.Vasiliauskaitė.

Stoliarenko shared her thoughts saying “It wasn't very difficult for me, but I expected it. In fact, I take part in such tournaments so that other athletes can see and experience higher level fights and try to reach that level.”

In a male category in Gi (with kimono) Martynas Banaitis from Kaunas became the absolute winner and the owner of the champion’s belt.

Wrestling in the Masters (Veterans) category was greatly enjoyed by the audience in which a well-known Lithuanian as well as world professional fighter, a founder of Lithuanian Grappling Federation, and now a Member of Parliament of the Republic of Lithuania Kęstutis Smirnovas took part. In the weight category over 90 kilograms, the latter made it to the finals and won a second place there. First place was given to Rokas Stambrauskas.

In total, 223 athletes from Latvia, Estonia, Poland, Russia, Belarus, Ukraine and Lithuania participated in the Open Baltic grappling championship. The next event by Lithuanian Grappling Federation is to be organised in three weeks in Šiauliai.