The debut of the grappling tournament in Panevėžys was marked by A.Vasiliauskaitė's record 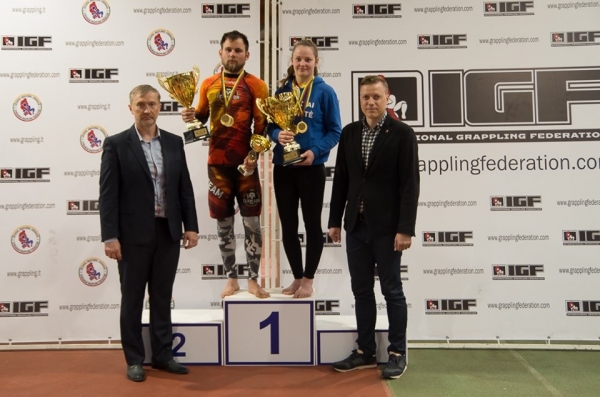 Panevėžys Open grappling championship which was held in the capital of Aukštaitija for the first time in history, gathered almost 200 athletes from Lithuania, Latvia and Russia. All competitors were divided into two groups: with and without kimono.

Raimondas Zeniauskas from Klaipėda became the winner of the Absolute category of men without kimono, in the finals unexpectedly defeating one of the strongest Lithuanian grappling wrestlers Laimonas Stančikas from Vilnius.

Albertas Kašėta won in the group of wrestlers with kimono in the Absolute category, in the finals defeating Davidas Krogertas from Kaunas.

"I would say that the outcome of both competitions: with and without kimono, took us by surprise. It is obvious that a smaller number of participants in the group with kimono contributed to Albert's victory. Raimondas case proved that prediction in our sport is a very difficult task. Regarding the tournament itself, I must admit that I am very glad that this event succeeded in attracting almost 200 participants despite the fact that it was held in the capital of Aukstaitija for the very first time. It was a really solid start,” said Adrius Kupstas, president of the Lithuanian Grappling Federation, rejoicing.

The world champion Aida Vasiliauskaitė was unrivalled in the group of women. She won four first places in total, including the championship titles of the Absolute weight category with and without kimono. A. Vasiliauskaitė who moved from judo to grappling, became the first athlete to attain such a fantastic achievement in a single tournament.

Gertruda Statkute and Ieva Smirnovaitė also became champions in their weight categories in the group of female competitors without kimono.

The tournament in Panevezys was the last grappling tournament of this season. The new season will start in September with the opening of the European Championship in Siauliai.