Grappling season: all - from records to a professional fight 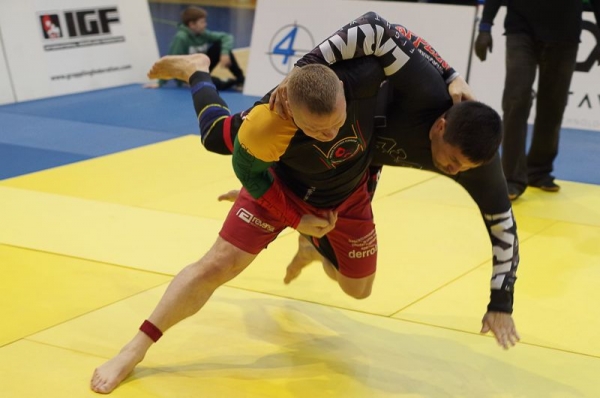 The world grappling championship which was organised by the federation last year for the first time, hasn’t interrupted Federation’s work agenda. On the contrary, the second part of the season was even more busy then the first. Namely, in five month only, the record number of participants was recorded, Panevezys entered the scene of grappling fights, kimono discipline was introduced and the professional fight for the Champions Title of the Baltic States was organised together with the Bushido Federation.

The first piece of the puzzle is the discipline of kimono. According to Adrijus Kupstas, the president of the federation, this idea has been implemented after serious consideration of all the pluses and minuses.

"However tempting it is to take a credit for it, however, it wasn’t our idea (he smiles). We only needed to give our support to those organisations which have been practising this discipline for a long time. To tell the truth, implementation of the idea wasn’t an easy one day’s work. It came to life after an extensive research and consideration of various options. We began when we got fully prepared.

Looking back from the current position, I would say that all was done well. If there are participants, then, it means that discipline is needed. To sum up, I will say – when the time became ripe – the discipline was introduced," - said the president of the federation.

2019 brought grappling new records - over 400 participants took part in the Cup competition. Events of such scale don’t happen very often in the combat sports in our country.

“It always happens in life that when an activity is new, the results tend to rise for a while and then the growth suddenly stops. In our case, the same happened. Year 2018 was stabile and we started to think how we could increase the number of participants further. The introduction of the aforementioned kimono discipline certainly contributed to it.

Cup competitions in our sport have always been the most popular type of competition, but this year the number of participants got bigger than usual. Speaking about other tournaments, Šiauliai and PanevÄ—Å¾ys are perfect examples. Siauliai has organized the competition in category without a kimono, while PanevÄ—Å¾ys did both - with a kimono and without a kimono. In the latter as much as twice more participants took part.” - said Kupstas.

The fact that PanevÄ—Å¾ys emerged onto the grappling map of Lithuania, is a great achievement of the season, added the president of the federation of the marshal arts.

“We are determined to expand our geography each year. I am happy to admit, that so far we are doing quite well. True, I would still like to have a tournament in Klaipeda. We have managed to have great Baltic games there once and they were awarded the highest scores.

Returning to PanevÄ—Å¾ys tournament, I must admit that the representatives of its municipality were very supportive of it. When choosing tournament’s location, we always take this factor into consideration. The successful debut tournament in PanevÄ—Å¾ys, encouraged us to make a firm decision to have another one in Aukstaitija capital again next year,”- shared his thoughts about the city A. Kupstas.

Apart from all the things mentioned above, it is important to say few words about the first professional combat for the Champions title of the Baltic States which was organised in spring this year at Siemens arena. Eighteen year old fighter Kasparas Stazdas who entered arena along with the best Lithuanian sportsmen, won the title and the belt which no other fighter was granted.

“We had come up with this idea a year ago. Then it failed, but now, with the help from Lithuanian Bushido Federation, the dream came true. Also, big thanks to Donatas Simanaitis for his involvement, on our part we will try to make sure that the fight would not stay just one off.

Right at the beginning we decided that the absolute non professional champions of the Baltic countries would be on the arena. Our mission is accomplished,”- said Mr. Kupstas.

The season coming to an end, grappling society will be enjoying summer holiday until August, when Lithuanian national team then gathers in the camp and starts preparing for the European Championship to be held in September in Siauliai.